Congratulations to the Winners of the NASPR Awards!

(The reason why you may not find your sportpony in these rankings may either be that you did not submit any scores at all or not in sufficient number.
Have another try in 2018!)

MICROCHIP READER FOR OUR MEMBERS’ SPORTPONIES 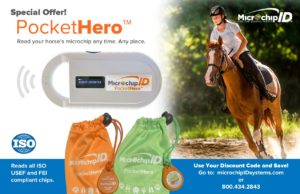 SPECIAL OFFER GOOD TO May 1, 2018.
We have arranged a special member discount of $49.95 with our microchip provider MicrochipIDEquine on their new microchip reader PocketHero™ .
With this reader you yourself can check a chip without having to call your vet; you should check the chip before a show, and also do that at any time for many other reasons.
Please use the code: ‘savemore’ when ordering online @www.microchipIDsystems.com
or by phone 800.434.2843 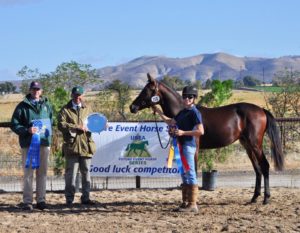 Who is the Rightful Breeder of a Horse/Pony?

The WBFSH has recommended the following definition:

Several of our NASPR sportponies will be there to compete for the awards. Good luck and have lots of fun!!!

NASPR Stallion Magnum at the 2016 NDPC 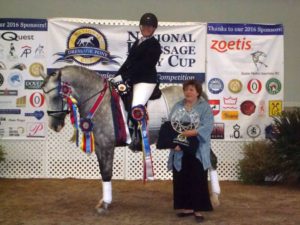 All weekend, people stopped to stare every time Klaus Biesenthal’s stunning grey North American Sport Pony stallion Magnum entered the ring, and rider Kathryn Barry of Freeport, Ill. couldn’t have been prouder as they easily claimed the Training Level Open Championship and the NASPR breed award with a dominating average score of 72.623%. “This is my first National Dressage Pony Cup and I can’t wait to come back, hopefully with more ponies!” said Barry. “With the date moving to July this year it actually worked out great for me, and it was a long way but I’m so happy we decided to make the trip. I couldn’t be more thrilled with Magnum – he’s my best friend, and we do everything together. He’s only been to small local shows, so this is the biggest environment he’s ever been in and he’s handled everything wonderfully – I’m just over the oon!”

Finishing with Reserve honors was Jessie Hayes of Pittstown, N.J. aboard Lauren Chumley’s five-year-old Fjord mare FMF Liesl (67.509%), which also earned them the Neil Sorum Memorial Award for the highest single score earned by a Fjord.

Barry and Magnum also did well in the First Level Open division but had to settle for second behind another young superstar in Melissa Dowling’s German Riding Pony gelding Nikolas, ridden by Pony Cup veteran Lauren Chumley of Pittstown, N.J. The elegant pair swept both First Level Tests 2 and 3 to win the championship with an overall average of 70.625%. Caitlyn Massey of Arlington, Tenn. and Zassafrass scored a come-from-behind victory in the hard-fought First Level Junior/Young Rider division over Kalie Beckers and Madoc Mari – a win which also earned Zassafrass the coveted Pugsley Award for highest-scoring grade pony (68.759%).

According to the new rulings, USEF/FEI and some of their affiliates now require across the board microchipping, i.e. for passports, registration cards, competitions, etc.

The NorthAmerican Sportpony Registry therefore offers its members the opportunity to obtain a microchip for their foals and all their registered ponies!

A microchip also identifies your pony in case it gets lost or stolen.

Our at-cost price includes the microchip and lifetime enrollment in the Equine Protection Registry EPR.

It is as easy as this:  NASPR will mail you the ordered microchip/s, enroll your pony in the EPR, and forward the microchip ID to USEF. The microchip ID will also appear on the Certificate of Registration for all newly registered sportponies. YOUR task is to have your veterinarian implant the microchip and return the filled in Microchip Implantation Certificate to our Office which gets the actual enrollment process started.

Here is the Microchip Order Form

The NASPR is one of the major sponsors of

The NASPR supports and sponsors the following sanctioned shows in 2016